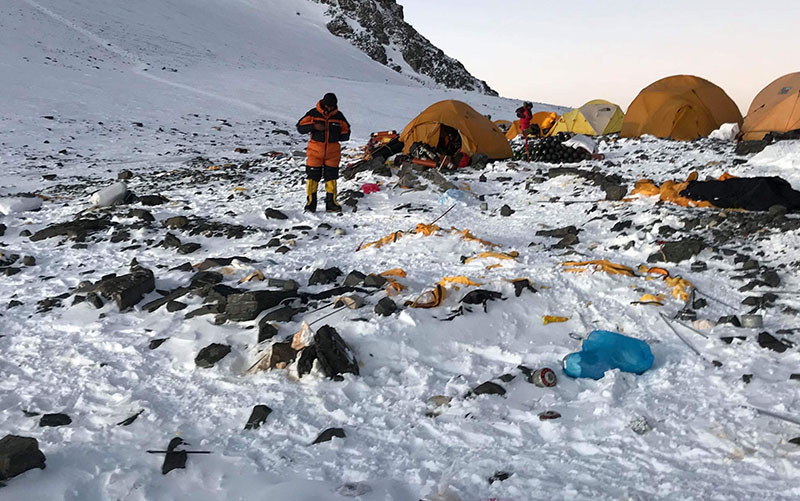 Piles of trash on the high camps of Mt Everest have left the locals of Khumbu region very fearful of the adverse impact on their health and environment in the near future.

Downstream communities, which have already witnessed the impact of global warming, will be the first to bear the brunt of rampant pollution in the high mountains, Nima Sherpa, a resident at Namche Bazaar, said. “The climbers have been contaminating our environment with human waste in the high camps of Everest,” Sherpa commented.

Kipa Sherpa of Chaurikharka said the situation had been worsening each year in the Everest region as climbers spent too much money in Kathmandu for their ‘pseudo dream of Mt Everest’. “They often bribe government officials in Kathmandu after leaving trash on Mt Everest,” he claimed.

Nima Doma Sherpa, a hotelier in Lukla, urged stakeholders to act immediately to keep Mt Everest clean, as the mountain was long revered as an abode of the gods. “Climbers come and go, but our generations need to survive here,” he said, “Polluting our mountains is a heinous crime against humanity.”

Besides, keeping Mt Everest clean would also be a great honour to the legendary mountaineers – Tenzing Norgay Sherpa and Edmund Hillary – who made the first ascent of the world’s highest peak 65 years ago on May 29, Pemba Sherpa of Namche Bazaar said.

John All, research professor at Western Washington University in the US, said that high mountain environments were fragile places and trash has a disproportionate impact. Leaving trash in high camps is possibly the most disrespectful thing a climber can do, he noted.

“The very small spaces that climbers use quickly turn into a sewer if we are not all considerate towards our fellow climbers and towards the mountain,” the scientist, who is also Executive Director at American Climber Science Programme, added that trash in the high camps can move down the glacier over time and also affect downstream water quality.

Stakeholders must take urgent action to address the problem as it has direct impact on environment as well as human life, according to him. “There is urgent need to keep the mountains clean as they share the world’s greatest freshwater resources while more than 1.4 billion people depend on water from the rivers of the Himalayas.”

Swedish mountaineer Carina Ahlqvist, who completed her scientific research on climate change for the European Space Agency and the National Aeronautics and Space Administration on Mt Makalu this season, suggested that garbage recycling could be done to avoid burning or landfill in the mountain region. “Recycling is actually not only good for the environment but also financially profitable once structures get in place,” the climber said, adding that there should be a long term plan for garbage management in the mountains.

Every season, the government collects garbage deposits from the Himalayan expeditions. Director at the Department of Tourism said the climbers deposited US$ 262,000 as garbage fund for 107 expedition teams on 30 mountains this season. “They will get refund after they produce garbage clearance papers from the local authorities including the Sagarmatha Pollution Control Committee for Mt Everest,” he said, referring to the garbage deposit and refund process, which had become a mere formality.

Holy stink! Piles of pooh litter Mt Everest
A version of this article appears in print on May 30, 2018 of The Himalayan Times.