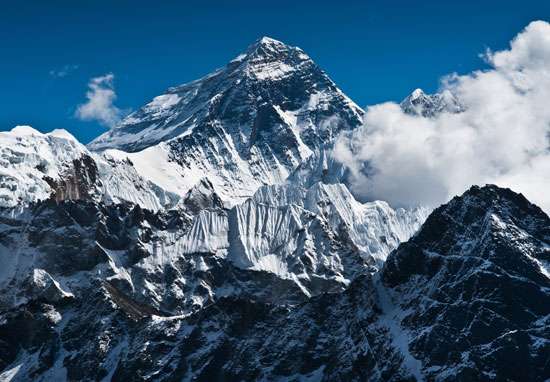 There are 3 regions in Nepal. The Himalayas, Hills, and Terai. The Himalayan region lies to the northern part of the country and covers the mountainous area. The altitude ranges between 4,877 meters to 8.848 meters above sea level. This region also consists of a large number of magnificent snow-covered mountains including the highest and third highest peaks in the world. Mount Everest and Kanchenjunga respectively. The region covers 15% of the total land area of the country. However, only about 2% land is arable. There are many pastures, gorges, passes, small lakes, glaciers, and falls. Almost all the big rivers running through the country originate from this region. The Himalayan region also suitable for animal rearing and tourism. Because of its geographical situation and climatic conditions, this region has a very low density of population. According to the census of 2011, this region accommodates 6.73% population of Nepal but at a decreasing rate. So, where is mt Everest located in what country? Or which countries border mt Everest? Mt. Sagarmatha is located in Himalayas region of Nepal, on the border of China.

See Also: How to Reach Mount Everest, the Highest Peak in the World?

As we all knew that Mt Everest was first scaled by Edmund Hillary (New Zealand) and Tenzing Norgay Sherpa in 1953. Everest, the highest mountain in the world lies in the Mahalangur range of the Himalayas in Solukhumbu district of Nepal. It is an exclusive gift of nature and a symbol of pride and attraction for the humans. Mt. Everest is 8848 m high from the sea level. Originally known as the ‘Peak XV, in 1865 AD, it was renamed as Mt Everest to commemorate (show respect) to the British surveyor Sir George Everest. The question may arise, Why is mt Everest named after? Showing the respect, Peak XV was renamed as Mt Everest. That is why? In 1956 AD, it was given the Nepali name ‘Sagarmatha’ meaning ‘forehead in the sky’ by Nepali historian Baburam Acharya. It is called ‘Chomo Lungma’ (goddess mother) in Tibetan. It was successfully climbed for the first time on 29 May 1953 by New Zealander Sir Edmund Hillary and Nepali Sherpa Tenzing Norgay. Until 2003 AD, within 50 years of the first successful ascent, over 1200 people have successfully reached the peak of the mountain. It continues to remain one of the most famous adventurous destinations for the people from around the globe.

About Mount Everest
Like all the mountains , local people were the first to discover it.Mount Everest , also known as Sagarmatha is world’s tallest mountain of 8848m height. The summit is the border of Nepal to the south and China or Tibet on the north. It is about 60 million years old. It was formed by the movement od Indian tectonic plate formed against Asian plate.It consists of different types of shale, limestone, and marble.The rocky summit is covered with deep snow all year long. The amazing fact about Mt . Everest is that it grows about a quarter of an inch every year. The wind can blow over 200mph and has the temperature of -80F. It can also be very hot with temperatures over 100F through which climbers go through to reach the summit.No one knew that Everest was the highest mountain in the world until 1856 when the Great Trigonometric Survey of India established its height. This was not done to find out the highest point on earth.Mahalangur is the Himalayan range where Everest lies. Khumbu is the other name of Mahalangur Himalayan range. Everest golden jubilee was observed in 14 Baishakh, 2060. On the occasion of Everest golden jubilee, 13 more mountains were opened for climbing.

Nepal Government makes a decision in 2008 AD to start observing 29 May as International Mt. Everest Day in order to heighten the image of the adventure and unique tourism by revealing the importance of Mt. Everest as a source of income.It is called Chomolungma in Tibet which means it is the mother of the goddess of the universe.It was first attempted in 1921 climbed from the northern side by a British expedition. The first summit was climbed by Sir Edmund Hillary from New Zealand and Tenzing Norgay , a Sherpa from Nepal. They climbed from the southern side which was lead by Colonel John Hunt.It is noted that people who climb Mount Everest have found litters and wastes such as equipment , ropes, bottles. The bodies of the climbers who die on the way are left behind on the surface of the mountain. It is estimated that Everest has about 50 tons of waste. Thus it is also called the dirtiest mountain. Since 1966 , at least one climbers have died on the mountain except for 1967. The causes of death may be suffocation , fatigue, and even starvation. There is an estimation of nearly 200 bodies at the Everest. The bodies have not been brought to the base because of the poor accessibility to transport and extreme weather.

What can a child at the age of 13 do? Probably become busy fighting over chocolates and doing home works . But a brave boy named Jordon Romero got attention from the whole world by becoming the youngest person to climb Mount Everest at the age of 13. Now let’s talk about the ones who think of retirement at the age of 60. But another brave man named Yuichiro Miura became the oldest person to climb Everest at age of 80.The Everest has the highest freezing point. The temperature on Everest never goes above the freezing point. During summer , the average temperature is 19C and in winter it is minus 36C. The atmospheric pressure at the top is very high so you can only breathe one – third of the total oxygen at normal elevations.

On August 10, 1980, Reinhold Messner became the first and only one to climb the mountain without any supplemental oxygen. Many people claim that it is impossible to climb without the help of oxygen . But it shocked the world and become a remarkable fact to Messner and the world itself. Messner is also the first climber to ascend fourteen of the world’s eight-thousanders which are mountain peak that reaches 8000m or more above sea level. Believe it or not but there is a weak cell phone signal on the summit. This allowed for the first tweet to be sent by the hiker named Canton Cool in 2011. It read “Ever summit no.9 , first tweet from the top of the world.” Two years later the first phone call was made from its peak.

The wind can blow over 200mph . A number of this magnitude when dealing with wind speed is also incomprehensible to understand . It is impossible to live through but a man named Babu Sherpa holds the record for longest time spent on the summit in 1999. He spent 21 hours in the freezing cold on top of largest land mass on the planet. There are various ways to descent from the summit but in 2007 , Bear Grylls the youngest British climber to reach the summit used a powered paraglider to fly over the peak. Various other ways are also used to descend from the mountain which includes snowboarding and skiing.

Mount Everest just like how tall it stands on the motherland , Nepal has made every Nepalese proud of their country. It stands tall and immovable as the tallest mountain on earth. Tourism has been fostered and still being increasing the revenue of the Nepal’s economy. Several conflicts have been faced on the context where Mount Everest stands – in Nepal or India. But no matter how much problems have been faced , it is concluded that Mount Everest stands high as its name on Nepal.